A small, highly portable laptop that can be used for typing and sending emails seemed necessary to me for as long as I can remember.  Whether such a machine was fast or had a big screen did not matter.  In other words, I have been craving the netbook long before its inception.  However, even though it feels like an eternity, the option to build such machines is a relatively recent one.  The laptop with the monochrome screen mentioned in an earlier post was my first such machine.  I now found the receipt: 1997!  It is less than 15 years old, has 20MB of memory and a 400MB disc...

One thing missing from many (most?) laptops of the time was any real mechanism to network it.  Dial-up was one option using some external modem.  A later post will talk about this.  But to have a truly networkable laptop, one needed a real network interface.  So I got a 3Com Etherlink III 3C589C LAN PC card for my 1997 laptop.

As can be see from the photo, the interface consisted of two parts: a dongle and a PCMCIA card (or, as some people insisted to call it: a PC card, which was technically correct).

The dongle is obviously the part that connected to the network.  Most networks I wanted to connect to used coax, but it was obvious that UTP was coming.  So, I tried to future-proof my investment by buying a dual adapter - one that could connect to coax using a BNC connector, as well as to UTP, using an RJ-45 plug.  Alas, the UTP connection was only a 10BaseT, and 10Mbps soon turned out to be too slow.

Here one sees the card and dongle assembled - ready to be inserted into the laptop's PCMCIA slot. 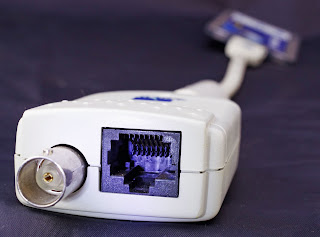 But the need for speed had to be satisfied.  And satisfaction came in the form of the SMC8040TX PCMCIA 10/100Mbps Fixed-Port Adapter. 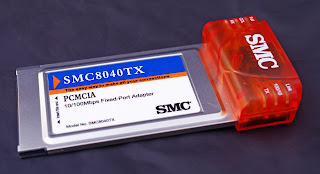 The SMC still could work at 10Mbps.  But at 100Mbps it was ten times as fast as its predecessor. 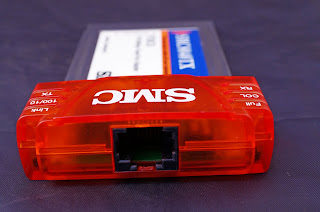 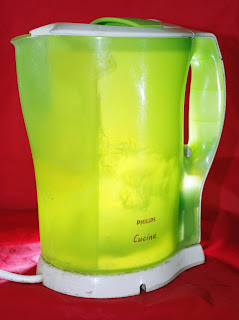 There can't be too many fields where one can reminisce about the good old days a mere decade ago...
Posted by Martin Olivier at 20:50