In many office buildings a wire conduit runs along some of the walls that enables one to easily install a new cable to any office (and, in principle, to remove old unused cables).  The terms reticulation or cable management are used for guiding cable through such conduits.  Often the conduits are installed about 1m above the floor to make it easy to plug plugs into sockets installed in the conduits.  Such conduits are known as trunking.  (Apparently they are known as wireways in some parts of the world.)

Here is an example of trunking installed just below the window sill in an office that will not be identified. 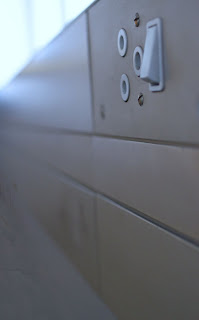 Viewed from a more conventional angle one can see a South African electrical socket on the cover over the top duct and several sockets and cables attached to the cover on the bottom duct.

Removing the covers reveals the innards of the trunking. 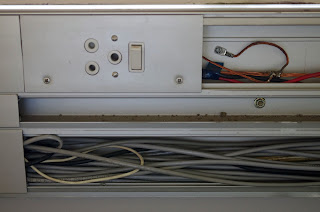 The middle duct is unused.

The bottom duct contains a large number of UTP cables - as one would expect in a modern setup.  Note the black coaxial and cream phone cables also making an appearance.  Also note the loops in some of the cables: When installing cables one quickly learns to take a cable beyond its intended termination point and then return with a loop.  This gives one some space to work when attaching the socket or other fixture to the end of the cable.
Posted by Martin Olivier at 19:36