Below is a rather poor picture of a satellite phone (and another in its box).  I recently took the picture in a shop display in Johannesburg in rather poor light using my cell phone - hence the poor quality.  The visible phone is intended for use with the Iridium constellation of low earth orbiting (LEO) satellites.  Since the entire earth is covered by the constellation it is really true that one can make calls "from anywhere [on earth] to everywhere" on earth - unless one is somewhere where there is too much of an obstruction between the phone and the sky.

While the picture is poor it does illustrate the relative size of the phone's antenna when compared to the phone.  The phone itself is rather bulky too. 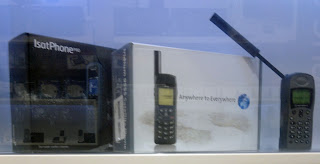 I did wonder whether it was an option to buy one of these phones to have a physical example in my museum..  The answer is a resounding no.  This cost of the phone is about R15 000.  Calls currently typically cost between $1 and $2 (US) per minute (depending on where on earth you are).  Data calls currently cost about $1.50 (US) per kilobyte.  The phone weighs 266g.  Its dimensions are 143x55x30mm.  The battery lasts about 30 hours while on standby and about four hours when in use.

The phone (or, at least box) on the left uses the Inmarsat geostationary satellites (GEO).  It is slightly heavier than the Iridium phone (279g vs 266g) and slightly bulkier (at 170x54x39mm).  Interestingly, despite the higher altitude of the Inmarsat satellites, talk time is double that of the Iridium phone and claimed standby time is 100 hours.  The claimed data rate is up to 20kbps.
Posted by Martin Olivier at 10:45