I have just booted up one of my old laptops.  One of the prominent applications on the (rather short) list of Windows 95 applications was Netscape Navigator 3.01.  Upon opening it I found the following page still cached in it (dated 10 April 1997): 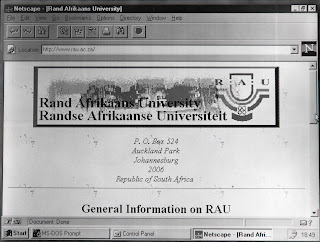 It should be noted that this is not a monochrome image.  The display of the laptop was (and still is) monochrome.    The smudges on the picture are imperfections developing on the display rather than dirt.

This was an early home page of the Rand Afrikaans University (RAU).  (RAU was merged with other academic institutions to form the University of Johannesburg in 2005.)  The homepage was typical of early university homepages.  Usually they were developed by some 'techie' without any corporate involvement.

Scrolling down one finds the following useful information: 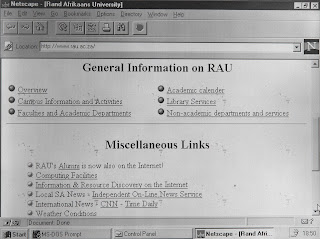 The 'general information' section consists of six links.  Just finding something else to link to was an achievement - hence the links to sites such as CNN.
Posted by Martin Olivier at 19:28