A physical ring topology is prone to fail when any of the nodes on the ring fail.  Suppose the beads below are nodes and the string represents network links.  A break at any node or any link breaks the ring. 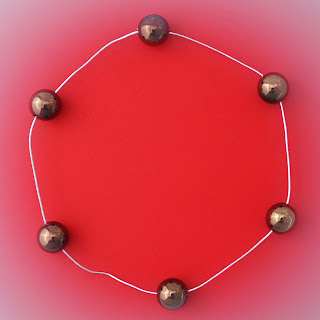 The solution is to wire all nodes on the ring via a central 'hub' that bypasses any node that is not responsive or not present.  Below the nodes are linked though such a hub. 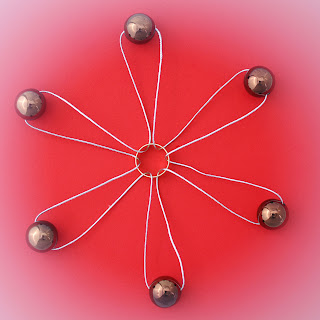 If a node becomes unresponsive, the hub simply bypasses that node and the ring remains a ring. 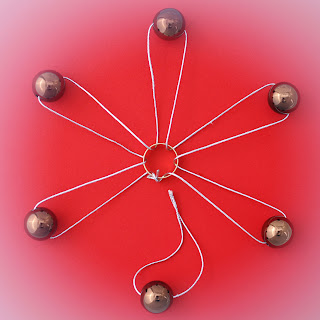 The 'hubs' through which token ring networks are wired are known as multistation access units (MSAUs or MAUs).  Below is an 8-port IBM 8228 MSAU.  It can operate at either 4 or 16Mbps using the IEEE 802.5 standard.  It also has RI and RO (ring-in and ring-out) ports enabling it to be connected to up to 31 other MSAUs making it possible to build a ring of up to 256 nodes.  (Later MSAUs also supported 100Mbps, and plans were made to build 1Gbps MSAUs, but were abandoned before they were built.) 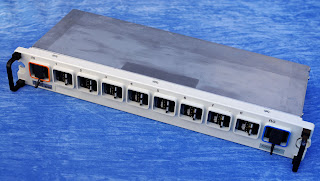 The ports on the IBM 8228 use the IBM Data Connectors (IDCs). 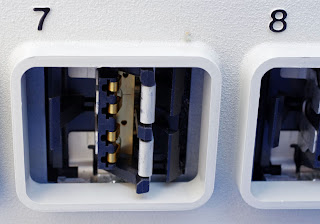 The connectors are interesting because the 'plug' and the 'socket' are identical.  For this reason the data connectors are often called hermaphroditic.  As one may observe in connector number 7 above, two pairs of copper strips are exposed in the middle - one for sending and one for receiving.  To plug another connector onto this one it would be turned by 180°.  The transmission pair of the one would automatically mate with the receiving pair of the other and vice versa.

The next picture shows two cables that are about to be plugged into one another.

And voila!  The two become one.

An aspect of the connectors that may not be clear in the post thus far is their size.  The MSAU is intended to be built into a 19" cabinet.  Each connector measures about 25mm x 25mm x 40mm.  That is huge! 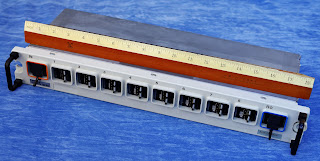 The IBM 8228 MSAU was shipped with eight baluns that converted the IDC to an RJ-45 socket. Baluns, however, will be the topic of a future post.
Posted by Martin Olivier at 18:44