In the second half of the 1990s a few vendors had a dream: Let's build a computer where the operating system, applications and data are somewhere on the network.  IBM succinctly described the dream in in the manual of its Network Station 300.


"The Network Station Series 300 is designed for environments that combine a need for multiple server access with browser access to applications and data that reside on a corporate intranet or the Internet. ... [It] can be thought of as the 'Internet computer'."

(IBM's Network Station will be featured later in this museum.)

These computers were known as network computers - a phrase still trademarked by one of the vendors.

Sun's contribution was the JavaStation - or the JavaStation NC (where NC indicates that it is a network computer).  The first JavaStation version looked like a brick.  The second (and 'real') version of the JavaSation had a much more futuristic appearance. 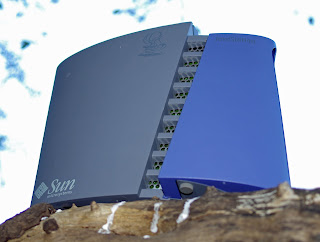 On the technical side the major innovation of the second version was the ability to operate outside the context of an intranet.  It could boot on its own, and then use applications, data and other services from the Internet, without any 'local' facilities. 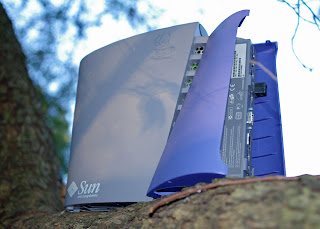 On the outside there is hardly any indication of the intended use of the JavaStation.  Two 'doors' at the rear reveals something more about its intended use. 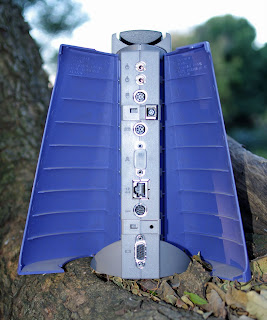 The key connector is the RJ-45 socket that enables it to be connected to the network.  Provision is also made for a (PS/2) keyboard, a (PS/2) mouse, microphone, speakers and a serial connection (and, of course, electricity). 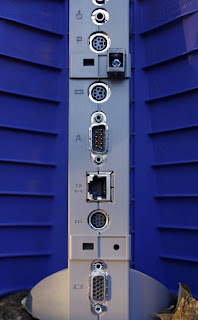 In order to estimate the size of the JavaStation it is pictured below with a matchstick. 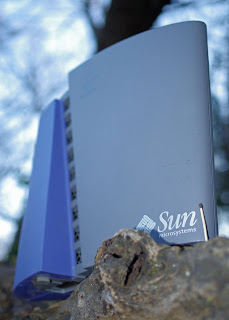 On the inside it has a (fast for the time) 100Mhz MicroSPARC IIep CPU and provision for up to 64MB of RAM.
Posted by Martin Olivier at 12:25