Integrated Services Digital Network (ISDN) - as the name indicates - is a digital network (provided by telecommunications companies) that may be used for various (integrated) services.  The services that may be 'integrated' in this manner include (voice) telephony, fax, (computer) data and anything else that may be represented as 1s and 0s.  ISDN comes in two flavours: Basic Rate Interface (BRI) and Primary Rate Interface (PRI).  PRI will take a E1 (or T1) line at one end and split it into 30 (or 23) 'data' channels.  BRI will take a more-or-less normal telephone cable and split it into two 'data' channels.  BRI is the topic of this post.

Below is the NT1 device supplied by Telkom if one had a BRI ISDN line installed at one's home or one's office.  (There was an alternative device that will be mentioned in a later post.) 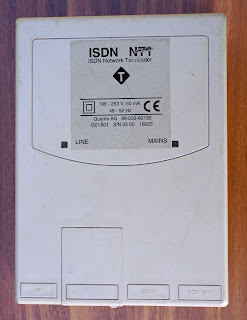 Note that this NT1 device is not an "ISDN modem" - those will be discussed in a later post (to the extent that they exist).  The NT1 is the network terminator installed in one's house or office.  It used to be part of Telkom's network and thus belonged to Telkom.  The user's equipment could be plugged into the other side of the NT1.

Opening the NT1 provides more colour, but not more insight into its operation. 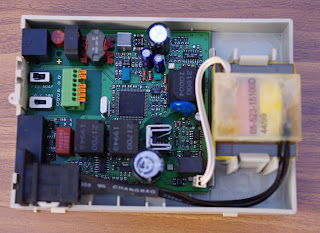 Let's rather look at the four sockets that are provided. 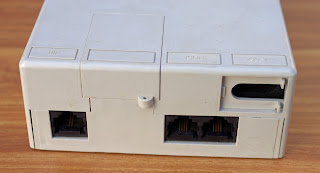 On the left is the socket into which Telkom's line was plugged.  This is known as the U interface.  The nice thing was that one's ordinary old copper wire running from the exchange could the used.  At the exchange they simply removed the link from the normal telephone system and attached it to an 'exchange' network terminator.  And, at one's home the telephone was unplugged and the NT1 plugged in.  Where the old telephone line could only be used for a single conversation, it now provided two data channels, either of both of which could be used simultaneously to carry data (including digitised voice from a digital telephone).

The not-so-nice consequence of this alternative use of the telephone cable was the following.  Normal telephone wires supply 50 volts of electricity.  Once the line was connected to the exchange network terminator 100 volts of electricity came down the line.  No, it was not able to electrocute someone (because the current was limited), but it was quite capable of sending a phone or modem up in smoke.  There are a couple of sad tales of people who found a 'telephone jack', unplugged whatever was plugged into it and plugged a modem in - only to immediately learn that this was no ordinary phone jack...

The next two sockets - like the U interface - are RJ-45 sockets.  As noted earlier, this is where the user's equipment would be plugged in.  It is easy to infer that each of those sockets would provide one of the two data channels, but such an inference would be wrong.  The interface on the user's side is actually a bus (known as the S bus or S/T bus) into which multiple (more than two) devices could be plugged.  Those two sockets are merely two access points to the bus.  If one had more than two devices, connections to those sockets would be split to enable one to connect multiple devices. 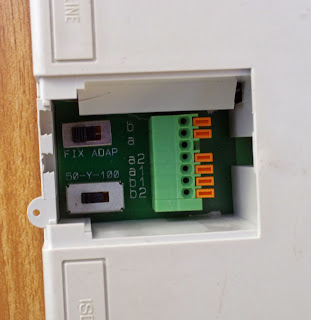 The observant reader may have noticed that there is a part of the cover that can be removed.  Once removed it exposes some contacts and some switches.  Let's ignore the switches and just look at the contacts.  The upper two contacts provide an alternative to attach the NT1 to the copper cable from the telecommunications company.  Rather than using a normal phone jack, the incoming line could be inserted into the top two holes.  This immediately removes the temptation for anyone to plug a modem into the phone jack, because there no longer is a normal phone jack.  Similarly, the bottom four holes provide an alternative attachment point for the S bus (replacing the need to use the two external RJ-45 connectors).  If these connectors inside the box were used, it was typical to plug blank RJ-45 plugs into the external RJ-45 sockets. 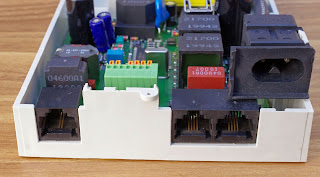 The last remark about four points to connect the S bus may yet again lead the reader to the wrong conclusion.  It is not the case that they provide two holes for each of the two S sockets.  Looking at the picture above one may (correctly) infer that each of the RJ-45 S sockets uses four wires.  Two wires are used for sending information and two wires for receiving information.  Therefore the four holes seen earlier just provide access to the four lines of the S bus.  They would be split as required.
We said earlier that BRI provides two 'data channels'.  Technically those channels are known as bearer channels, or B channels.  Each B channel operates at a (guaranteed) rate of 64kbps.  And then there is a control channel, known as a D channel, operating at 16kbps.  BRI is therefore also often denoted as 2B+D.
If any device on the S bus wants to communicate it would send a request via the D channel.  A B channel would then be allocated to it (or, if requested, both B channels could be allocated to it providing a guaranteed 128kbps connection).  If one device uses one B channel, another may use the other.  Though multiple pieces of equipment could be connected to the S bus, at most two B channels could be in use at any time - and it is possible that one device could be using both.  For incoming calls it was possible to let any device answer it, or, based on various schemes, to let a specific device answer the call.  If one had four digital phones on the S bus it possibly did not matter who answered, but if one had a fax machine, telephone and computer connected, who answers could be important.  Even when using only telephones, it could be important exactly which phone rang.
64kbps sounds slow by today's standards.  However, it should be kept in mind that the bandwidth is guaranteed.  Even a megabit per second ADSL line may slow down to almost no throughput - something which is not supposed to ever happen on an ISDN line.
We are now in a position to discuss the function of the NT1.  On the one side (the U side) is a single copper loop carrying three channels (2B+D) in two directions.  These six streams of data need to be multiplexed and demultiplexed  by the two network terminators.  In addition the NT1 has to manage the S bus: if a device puts data on the 'send' pair of the S bus, the NT1 should figure out on which channel it belongs and then multiplex it accordingly.  Similarly, if data arrives from the U interface, the NT1 should figure out for which device it is intended and then send it out on the S bus with the appropriate addressing information on the receive pair of wires of the S bus.
Just in case their is any doubt left in the reader's mind: An ordinary phone cannot be plugged into either of the S sockets.  One needs a digital phone that can put the appropriate addressing information on the S bus and respond when its address appears on the S bus.
Oh, yes - we never discussed the fourth plug.  It is a normal figure-8 connector that is used to provide electricity to the NT1.
Posted by Martin Olivier at 07:51