In order to connect one's network to the outside world via ISDN BRI one needs some device to do so.  In an earlier post it was explained that the NT1 terminates the telco's network and 'converts' it to an S/T bus.  Now we need devices to plug into that bus.

In general the lines coming into a company are plugged into some networking device, such as a router.  A medium-sized company may, for example, have lines coming in from various offices - they may run a copper cable to their building next-door, have leased lines to their bigger branch offices and then use (or have used) ISDN to connect to a number of their smaller offices.  This means their router (or other network device) has to be able to connect to a range of possible media.  And nobody wants to replace an expensive piece of technology the moment other technology changes - for example replacing the ISDN line to the telco with an optical fibre to the ISP should not require a new router.  The solution was obvious: put the interface to the media on an interface card that could be replaced when necessary.  We have seen such solutions in mainframes, minicomputers and personal computers.  A number of products that are currently being built ignore that lesson - they are engineered for obsolescence because often the battery is built into the unit.  When the battery dies, so does the unit.  The unit will not survive until new technology comes along.

But, back to interface cards.  The card below provides an ISDN interface for a range of Cisco routers.  It is a Cisco ISDN BRI S/T 1 port module for the 17XX / 26XX / 36XX series routers.  As the S/T indicates, it is intended to be plugged into the S/T bus (or the S/T bus into it?).  In most contexts one would simply take an appropriate cable with two RJ-45 plugs on each end, and plug the one end into the NT1 and the other end into this interface card. 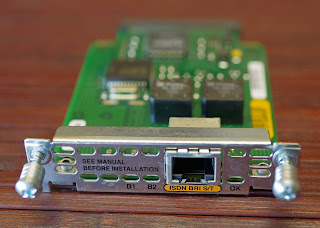 In the picture, the S/T socket is clearly labelled as such.  There are three tiny lights behind the holes in the cover plate.  Those holes are labelled B1, B2 and OK.  Obviously the OK light glows if the interface card operates correctly, and the B1 and B2 lights indicate activity on each of the two B channels. 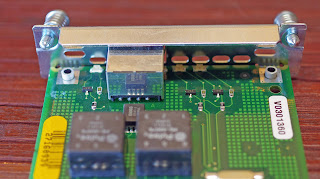 This particular module is the Cisco WIC-1B S/T.  WIC is an abbreviation for WAN interface card.  The intention is to feature several others WICs on this site at a later stage.

The word 'modem' was placed in quotation marks above because one normally uses a modem to connect to a telephone line and ISDN BRI is, in some sense, a glorified telephone line.  However, where normal telephone lines use analog signals, ISDN uses digital signals and the role of the ISDN WIC would be to provide a digital-to-digital connection.  Some conversion may be required, but it is not modulation or demodulation, and calling this WIC a modem would therefore be incorrect.

However, the following product is a bit harder to classify.  Whereas the medium to big enterprise may use a Cisco (or Nortel, or other) router, the small office or home office only wants to plug a few devices into its ISDN line.  So, let's look at a US Robotics Courier ISDN modem (omitting the quotation marks around 'modem' while we are making our minds up whether it is indeed a modem). 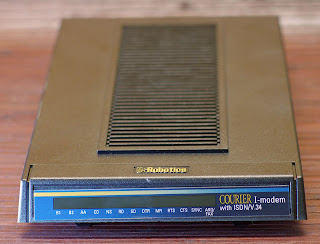 At the very least, the word modem appears clearly on the faceplate of this piece of equipment.  Some readers may also recognise the V.34, which refers to an old analogue modem standard.

Let's look at the rear of the unit in an attempt to figure out what is going on. 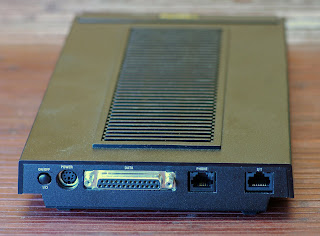 The reader should immediately notice the S/T socket.  This is where it will be connected to the S/T socket on the NT1.  To the left is a fancy socket for the power adapter, which we may ignore.  Then there are two more interesting sockets: an RJ-11 socket labelled phone and a DB-25 female plug labelled data.

As usual there are complications.  The telco is really now providing two networks: one analogue and one digital.  If you use your fancy ISDN modem to phone someone who is still using the plain old telephone system (POTS) you are sending out digital signals on a digital network and they are waiting for analogue signals on an analogue system.  So, somewhere the telco has to interface its digital network to its analogue network and if it sees digital telehone data coming along an ISDN B channel it has to convert it to analogue before placing it on the analogue network, and vice versa.  Of course if you are calling someone who has a digital phone on the ISDN network (or who has a similar setup than you) that phone (or the modem there) will 'understand' the digital signals and interpret them correctly without any further involvement from the telco.,

Let's now move our attention to the DB-25 female plug labelled data.  This is a serial (or RS-232-C) connection.  For the modern reader, an RS-232-C interface is almost like a modern USB or FireWire interface; it's just much slower and much more fiddly.  Of course this is where the computer is plugged in.  It provides a digital connection between the computer and the modem, so it seems most of our problems disappear.  Digital-to-digital is usually simple - we may have to rearrange the bits a bit, add some overhead bits and so on, but it all really amounts to repackaging .  Again life is not that simple.  It is possible that the party you are communicating with also uses an ISDN line, in which case most of our problems are indeed solved.  It's digital to digital to digital - via RS-232-C, then via the ST bus, then via the U loop, then via the telco's ISDN infrastructure, then via a U loop again, via another S/T bus, an RS-232-C link and we are at our destination!

However, suppose you want to communicate with a poor soul who is still using an analogue modem on the POTS.  There seem to be two possibilities.  The one is that you use the telephone plug - convert your digital data to analogue, send it into the phone interface that will convert it to digital immediately, transmit the digital data to the bridge between the telco's analogue and digital networks, where it will be converted to analogue again - until it reaches the destination modem, and where it will be converted to digital again for consumption by the destination computer.  If this sounds a bit cumbersome (and error prone) it does because it is.  A better solution would be to keep the data in digital format as it travels from the computer, along the ISDN line, until it gets to the point where it hops over to the POTS network.  At this point we have no choice - the data has to be modulated to analogue - but it only has to happen once which is a significant improvement.  However, the rate at which data can be carried along an analogue phone line is slower than the 64kbp (and much slower than 128kbps) of ISDN.  So, if we want to use this option we have to tell our ISDN to limit speeds that can go over to an analogue network.

To discuss the matter further would require a detailed discussion of the rather complex configuration of the modem.  Amongst others it entails telling the data channel what the maximum speed it is allowed to use if it will connect to an analogue modem on the other end.  And it entails configuring the analogue B channel such that it knows whether is gets voice or data (or fax) inputs.  The interested reader will find the modem's manual online.  After working through that documentation the reader should be able to answer the question whether this is a real modem or not.


-o0o-
Let's return to the WIC.  As noted, the user of the router can in principle replace the WIC with any other WIC.  So, if the user wishes to start using ADSL rather than ISDN BRI, the ISDN WIC can be pulled out and replaced with an ADSL WIC.  Of course this means the user has to ask the telco to convert its line to an ADSL line.  ADSL will have to wait for a later post.  In the meantime, here is an example of an ADSL WIC. 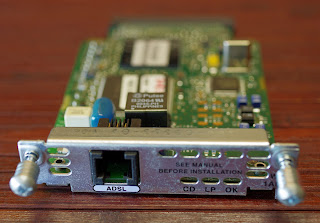 Side by side one can see that the two WICs look rather similar.  The ADSL one uses an RJ-11 plug - like normal phones do, while the ISDN uses an RJ-45.  Other than that the status indicators are different (and the placement of the socket obviously differs).

To conclude, here are the three devices featured in this post together (and two matchsticks have been added so indicate size). 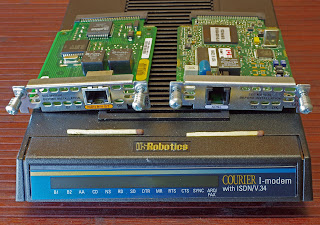