Satellites use microwaves to transmit signals.  Such signals should not be obstructed by any solid objects between the sender and receiver.  The phase line of sight is often used to refer to this requirement for microwave antennas.

When using satellites line of sight is not a major concern - except at the point where the signal from the satellite has to enter the building.  Satellite reception dishes are therefore placed outside and the signal is carried into the building by (typically coaxial) cable.  The dish has a parabolic shape and focuses any signals that it reflects to the end of the arm attached to the bottom of the dish. 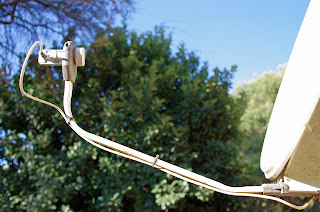 The device that is attached to this other end is the LNBF and must do many things.  Firstly, it guides the signal towards a tiny antenna. located inside it.  The part that does this is known as a feedhorn, and used to be a separate device.  However, in dishes that are intended for the consumer market, the feedhorn has been included in the LNBF.  In fact, the F in LNBF indicates that it is an LNB with a feedhorn, or an LNB-feed.  The LNBF then converts the microwave signal to a lower frequency that can be carried into the building by cable.  (Cable can carry microwave, but only over small distances because of attenuation.)  This process is known as block-downconversion.  This explains the B in LNBF.  The letters L and N represent the notion of low noise: the LNBF amplifies the signal it received before sending it out along the copper cable.  This has to be done in a special manner that does not also amplify noise that may have been present.  Exactly how this works is not important for our purposes - just note that the LN represents low noise amplification.

So, here we have a typical LNBF - mostly used to receive satellite television.  The matchstick has been included in the picture to give a sense of scale. 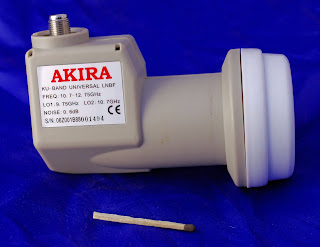 Note that this LNBF specifies that it is intended for Ku-band satellite.  This will be encountered again later.
Posted by Martin Olivier at 16:05