In the late 1970s Bulletin Board Systems (BBSs) emerged.  They were systems maintained by computer enthusiasts who referred to themselves as SysOps (system operators).  A SysOp would provide the BBS and link it via one or more modems to the telephone service.  Other users could then dial into the BBS and leave messages for other users, retrieve messages and upload or download software and other files.

The systems adopted by telecomms companies were generally known as Videotext systems.  In the UK the videotext system was known as Prestel; in many other countries systems were developed that were to a greater or lesser degree based on Prestel.  In 1986 the Sout African version, known as Beltel, was introduced by the South African Post Office (who then also operated the country's phone system).  Like other Videotext systems, it allowed communication via a 40-column 'terminal'; it also allowed chunky block graphics where every character could be divided into four 'pixels'.

Back then the Internet was still a scientific/academic network.  In contrast, the Videotext services were commercial and provided a platform for e-commerce to develop.  Below is a picture of the 1996 Services Directory containing about 20 pages of lists of businesses that were connected to Beltel, waiting for business from Beltel users. 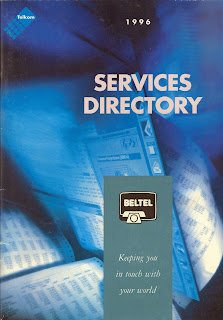 In addition to the directory of service providers, the directory also provided some other information.  Page 2, for example, answered the question: What is Beltel? 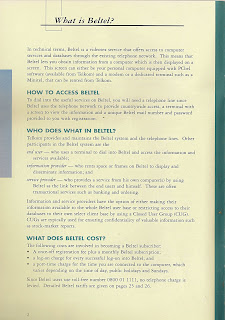 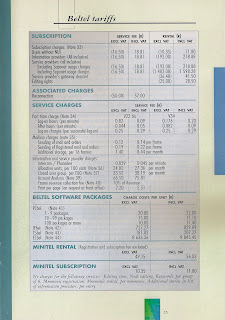 To use the system one either used a dedicated terminal (known as a Minitel) to connect to the system, or one used an ordinary PC with special software installed.  The software used with Beltel was known as PCbel and came on a floppy or, later, on what is in South Africa known as a stiffie. 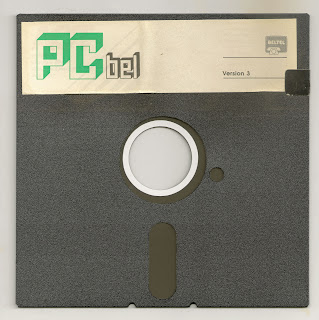 I just placed the PCbel diskette depicted above in my PC and it still seems readable (but not without some complaints from the system).  The floppy contains two files:


The primary use of Beltel for many of us was online banking.  Years before Internet banking was 'invented' we banked online via Beltel.  Here is an example of an online payment to a supplier. 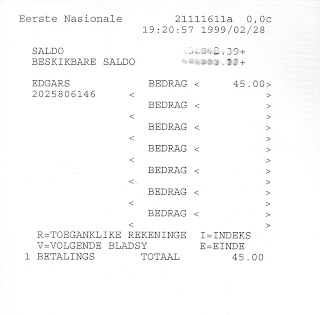 The printout is, in essence, a screenshot of what appeared on my screen when I made the payment.  Note the width of 40 columns and height of 24 rows.  Note the menu system used for navigation: On this particular screen one could press I for the index, E for the end (of interacting with this particular information supplier) and so on.  In the top right hand corner is the amount I had spent thus far: 0,0c - that is, nothing.  Banks did not charge for using their services via the Beltel billing system; they rather levied charges directly from the customer's account with them.

The printout above is dated 28 February 1999, which means it dates from fairly late in Beltel's history.  As the Internet developed the use of Videotext systems declined and eventually were withdrawn.  My bank 'forced' me to move to Internet banking by increasing its monthly fee for Beltel banking to an exorbitant amount, while Internet banking was offered at a low fee (and eventually free).

Earlier in the history of Beltel it was assumed that few users had printers at home.  When one joined Beltel banking the bank typically gave one a folder in which to keep a record of one's transactions.  First National Bank called their Beltel bank Videobank.  Below is my folder for such record keeping.  Page 1 is unfortunately missing.  The first entry on page 2 is dated 29 December 1993.  Extrapolating to page 1 suggests that I started using online banking around August 1993 - about 18 years prior to this post. 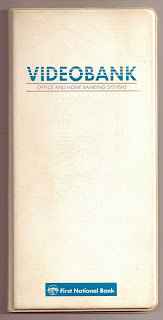